Band of Brothers No More!

Can I start by saying that men and women should be equal?

Can I start by saying men and women are not the same?

Can I simply start by saying women in combat is a stupid idea?

Can I add that I feel bad for the men on the front line who’ll have to work at developing a camaraderie with women, while trying to forget they’re women?

Truly, I can go on and on, but you see – the issue isn’t that women on the front lines will be equal to men in training and strength. I have no doubt that they will be selected carefully. The problem is human nature: Men automatically feel women need more protection than men. I doubt you can change this visceral reaction under fire. After all, if there’s a chance that a troop will fall in enemy’s hands, who do we suppose will be raped first?

And I know that I’m going to hear screams from many feminists about the next statement (and I’m a declared one, so don’t beat me up too badly), but some women have cramps during their periods, they have PMS or they lose a lot of blood during their periods, so can they truly be equal to men under all circumstances and conditions? I think not.

And think about the medic. If there are wounded soldiers and you hear the screams of men and women, who would you go to first? Of course everyone is going to say that you treat the gravest injury first, but what if both men and women have the same injury?

The overt message is about equality, and I’m the first one to say equality in the eyes of the law is nonnegotiable. But this new law seems to be more of a reaction to the letter of the law without any regard to the laws of nature.

The many implications and complications of women in combat cannot be overstated, from the overt to the covert.

Do we really believe that women are less sensitive than they are? That they are less emotional than they are? We continuously hear about soldiers coming home with PTSD, and when you think of a woman combatant, a woman that was designed to procreate, should we be worried about the killer instinct in the body and soul of someone who is endowed with maternal instincts? And when we think of warmth and nurturing do we associate it with men or women?

Ok, you might say this is a first step in desensitizing men, and that things will be equalized. Sure…

As long as there’s an innate attraction between men and women; and the relationship between intensity and attraction … then we have to be realistic about the intensity of being in training together, in combat together – that’s a lot of intensity, adrenaline, and a lot of ‘together’. 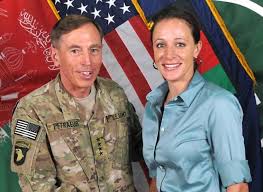 If General Petraeus could not contain himself, why should we believe that Corporal Doe will? In battle, the intensity of life gets accentuated and the emotions emanating from facing the battle bring on a primitive instinct to mate, to imagine that we’re in love (even if you have a loyal spouse at home), and to experience reality in a unique way.

Is it difficult to imagine this thought process:

The “Band of Brothers” is no more, but this woman with whom I trained knows me better than the one I left at home. She knows our deadly reality and I have a special bond with her. And… I feel protective towards her, even though she can do more push ups than I can.

Why shouldn’t we have sex now? We may be dead tomorrow.

And last final note re: personal experience. Many years ago I was in the military, went through officers training and was very comfortable using all kinds of weapons.

30 Responses to Band of Brothers No More!